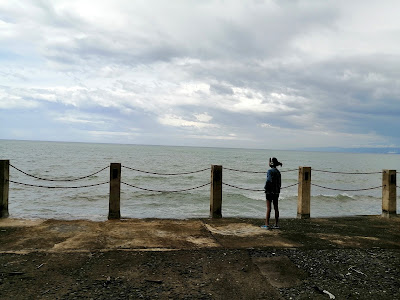 Good morning from my end, and much apologies for the dreadfully punny, cheesy title. What were you expecting, a heartfelt letter on how I would experience post-New Year enlightenment and yammer on about how it will be a blessed 2022? Oh, sweetie.
Here you see an obligatory picture where I seem to dramatically contemplate on wherever the currents lead me in this journey of life, as the wind sweeps past my legs and brings with it the bitter tang of sea salt and unforseen circumstances to arrive my way. Why I even stuck it there, I have no idea. But go ahead and enjoy the view while you still have the time, because 2023 is closing in quicker than I thought and it is a matter of time before we realize that one day, we will be nothing more than dried husks clawing for the sweet nectar of halcyon memories that can never return.
On that somewhat cheerful note, Happy New Year (I guess)!
Posted by CreativeChloe at 11:08 AM No comments:

I guess I'm back from the dead, huh.

Apologies for the long hiatus. For the sake of this blog's existence, I'll just leave something I made in here (since the video is too large to upload):

Posted by CreativeChloe at 4:54 PM No comments: 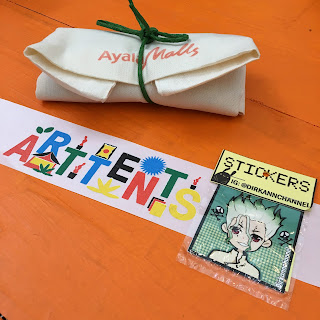 February is National Arts Month and in keeping with tradition of being the home of the local arts and creative community, Ayala Centrio will again host “Art Tents” from February 7 to 12, 2020 at the Activity Center.

Art Tents is a 5-day affair whereby Ayala Centrio turns its grounds into spaces for painters, animators, designers, poets, writers, performers and visual artists to share their work and expertise and where mall-goers indulge in various artistic experiences.

Now on its 3rd run, the event this year will also take a major leap as it will not only showcase the unique craft of well-experienced, global artists but will also aim to raise funds for a tent city. 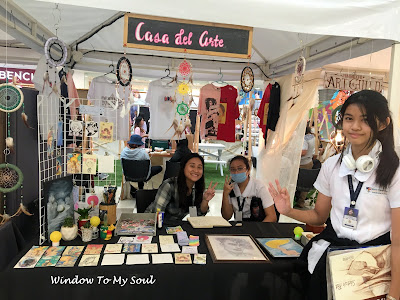 “What started as a community project has now certainly evolved into a colorful, safe and exciting avenue that everyone looks forward to and learns from every year. Ayala Centrio takes tremendous pride in this synergy that we have with the community,” shared Ayala Centrio Mall General Manager Hammer Roa.

The resource speakers for the art talks are the following:

Unchalee Anantawat – Born in Bangkok, she studied animation in Melbourne. In 2012, she and her friend Thomas Menard opened “Speedy Grandma,” an independent-run space that aims to support local and international artists and give them an alternative to the Thai contemporary art scene. She also opened “Poop Press,” an independent publisher that aims to energize the self-publishing culture in her native Thailand.

Leeroy New – Born in General Santos and now based in Manila, multidisciplinary artist Leeroy has worked on immersive and psychedelic installations in New York, Paris, Los Angeles, Hong Kong, Japan, Sydney, Thailand, Taipei, Singapore and Melbourne. His work intersects with different creative industries including installation, sculpture, fashion, production design, costuming and performance. He was a recipient of the Asian Cultural Council residency in New York in 2015 and was part of the Singapore Biennale 2008.

Anjo Bolarda – An artist, muralist, graphic designer, illustrator and cultural worker. His works have been exhibited in several local and international venues. He will also be creating a mural at the Centrio Garden.

Karl Adrian Aguro – Based in Cagayan de Oro, this graphic designer runs Uncurated Studio, a one-man graphic design studio founded in 2017. He won the championship during BluPrint Magazine’s 6th Design competition under the graphic design category in 2016. His works have also been published in BranD (Hong Kong) and IndieType (China).

Chingkee Te-Motoomull – The woman behind homegrown milk tea shop, Chingkeetea. She is part of a community that knows how to appreciate the value of art, the people behind it and the role it plays in the business setting. Currently, she is running 5 branches of her milk tea shop.

Chris Gomez – A mentor accredited by the Philippine Center for Entrepreneurship under Product Development, Chris was a finalist in the Habi Kadayawan 2019 Fashion Accessories Design Competition (Professional Category). A multidisciplinary creative and advocate for sustainable design, he creates relevant works that push his philosophy of solving problems without sacrificing good design.

Ivan Macarambon – An award-winning artist, Ivan uses a wide range of materials, techniques and styles, He makes murals, assemblages, 3D objects, installation art, sound art and digital art. He was a finalist in the Lethbridge 20000 Small Scale Art Award in Brisbane and the ANL Mission to Seafarers Maritime Art Award in Melbourne, Australia’s national still life painting award. He also served as representative of his region in the Committee on Visual Arts of the National Commission for Culture and the Arts from 2004 to 2007.

Zola Gonzalez-Macarambon – Currently studying at Monash University (Australia) and working towards a PHD in Film, Media and Communications, she is a teacher and writer from Cagayan de Oro. Her poetry has been published in Tingog Nanay (2017, University of San Agustin), Best of Dagmay 2 (2016, Ateneo de Davao University), Yes, Poetry, Misfit Magazine, The Literary Yard, Zombie Logic Review, among others. Her work was also featured in Peril’s Asian-Australian Arts and Culture, 10th anniversary Asians To Watch Out For issue. Patrick Gabutina – The person behind Tinabuan Arts and Crafts.

Patrick has more than 34 years combined experience in a multi-faceted career that has connected the arts, public service (in capacities as elected official, government employee and consultant and education. He earned an MA in Government Management from the Pamantasan ng Lungsod ng Maynila.

Ayala Centrio also partnered with the Ayala Foundation in rebuilding a tent community in Kidapawan.

In addition, eco tote bags will also be made available from February 7 to March 31, 2020. Designed by Melissa Abuga-a, a Kagay-anon visual artist and a participant of Art Tents as well, each eco tote bag will be sold for Php 180, the proceeds of which will be added to the donation to Kidapawan.

Wishing everyone a Happy New Year! Sharing to you what I've made lately. I made me and my family a chibi version as our family picture. If you can't find me, whale, I'm the one wearing black shirt with a white headphone. Since I'm the artist, I had the privilege of altering myself, eheheheh.... 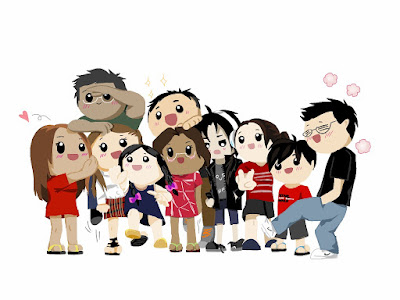 Below is the original pic. Just need to make some changes coz you will not definitely recognize me if I go with this one ✌ 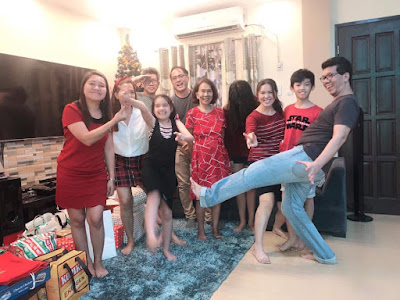 Posted by CreativeChloe at 6:29 PM No comments:

Hey Guys! Miss me? Sorry, I've been missing for some months. Forgive my inexcusable absence but going to a new school has taken a lot of tool in me. I know it's not an excuse but I have no other excuse.. if you get what I mean.

Finally, it's Christmas vacation and now I have some time to blog (apart from extending my sleeping hours then spend the rest of the day doodling in my sketch pad).

This afternoon, I was finally able to join CDOBloggers' Christmas Party along with my mom. Honestly, I was a bit awkward coz I've been M-I-A in a lot of events in this great Organization for the past months. So, I was a bit guilty --- but excited, too. My mom just helped me create my PayMaya account and I was hoping to win some games to get some, you know, PayMaya credits! (and I did! yay!). It was also a bit odd on my part being the youngest in this org coz they decided that we come in our 50's attire. Well, mom and I went for those (badass or bratty?) girls in the 50's called The Forgotten 1950's Girl Gang (ha. ha.). See our pic below. But I think we just look casual...🤔 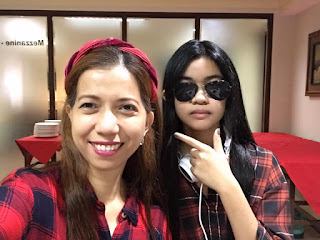 The party took place at the Mezzanine room at the 2nd floor of The VIP Hotel. I only have few pics in our party so I guess I'd rather share with you the food that was served that day.


And how lovely are these? You may think these are cupcakes but they are actually soap. Got one for myself and it smells like perfume :-) 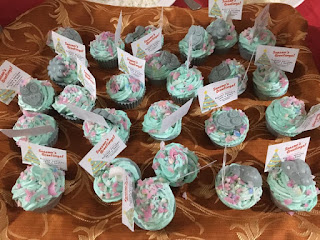 Posted by CreativeChloe at 7:02 PM No comments:


Cyberzone the leader in tech and innovation in the country is also now taking the E-sports by storm with its latest tournament, CYBERLEGENDS.

“With the fast growth of the gaming community, we aim to take it a notch higher as we offer Filipino e-gamers and fans an extraordinary experience through live tournaments and exclusive access to the latest in tech in select SM malls,” said SM Supermalls Senior Vice President for Marketing Jonjon San Agustin.

Cyberzone’s Cyberlegends is the first of the three big gaming tournaments for this year and it’s powered by Smart/PLDT & Samsung.  Mobile Legends enthusiasts, amateurs and pro gamers can win P300,000.00 of total cash prizes at stake and freebies from Cyberzone brand partners.

Cyberlegends will happen at SM CDO Downtown Premier on May 25, on the 29th of June at SM Seaside City Cebu, at SM Pampanga on July 14 and finally at SM North Edsa of the 24th of August.

No matter what your tech interest is, whether it be gaming, virtual reality, tech upgrades, cosplay, photography, music, or other hobbies – there will be something for you at Cyberzone. For more information, visit www.smsupermalls.com.
Posted by CreativeChloe at 9:00 PM No comments:

CDOBloggers had its first general membership meeting last May 11, 2019 at none other than Seven Seas Waterpark & Resort, and as usual...I was one of the last ones to arrive 👏👏.

Supposedly, we would have been there in time for the speech, the highlight of the event and perhaps the food, so technically it was my fault that we were late due to a hitch in my schedule. And supposedly—I have to be honest here—I, a first-timer, wouldn’t have high expectations for the waterpark after having to deal with many twists and turns in the road.

No surprises—it surprised me (the irony of the sentence, lol). The first thing that greeted me once we were granted access to the premises was the cool mist sprayed everywhere to give a certain beachside effect to it, and that was already it (kudos to their creativity!). Next was...again, the food. Granted, it was reserved for the event, but damn—the salad, the beef, the iced tea and the pumpkin soup won the grand prize. Looking back on it, I regret being too anxious about the waterpark’s time-limited features, because I lacked the time to properly appreciate how good the food was.

I don’t regret trying out the rides themselves, though—or more accurately, at least a fraction of the waterpark experience. Being an open hydrophobic, it was quite silly of me to freak out at first at the Mighty Maui River, but soon enough it grew on me like a drug. Unfortunately, it closes by five PM, and I am fairly certain I mentioned my severe lack of punctuality for this event. 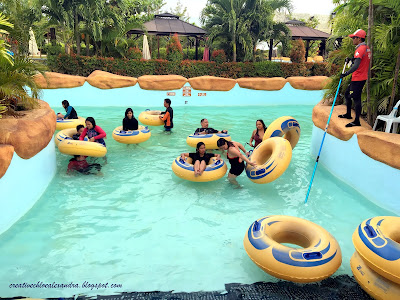 But on the upside, Buccaneer Bay largely compensated for the fun I missed. Or, per say, as much fun as a self-proclaimed shut-in can have, because it mostly involved laying down on the “coast”, randomly “sitting” or “standing” around at about two feet below the surface, or bobbing around like an oversized toddler in a (my English has begun to diminish, my apologies) salbabida. And like every other ride, it is under a time limit of until six. Bl0@dy h*11...

For a first-timer such as I myself, I’d say that the waterpark adventure back there was worth every second. And if you ask me, I’m willing go back there one day and ditch a bit of my hydrophobia for more of the experience. Maybe I’d be lucky enough to try out more of the pumpkin soup... c(*w*c ) 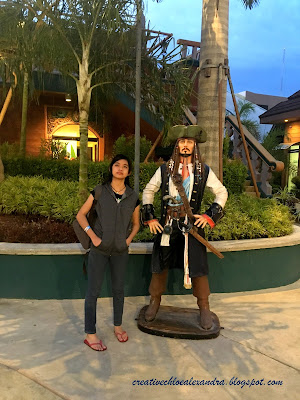